‘The Power of One’ was registered in 2016. The website went live on October 11, 2016 (on the auspicious day of Dusherra). It is a non-profit charitable trust in the field of education. The Trust is the dream project of Prasad Narayan who lives in Pune, India. Like many, Prasad does his bit to help the poor and the needy. But he always dreamt of doing something on a much bigger and broader scale.

Prasad always wondered why funds should only be collected when a calamity strikes. Why should just a handful of people contribute money to provide financial aid to an individual? Most importantly, in lieu of maximum funds coming from NGOs, charitable trusts, organizations, businessmen and other individuals, why can’t all the tax payers come forward and join hands in helping the poor and the needy? If tax payers can contribute just a rupee every day and continue doing that for the rest of the year, we are talking about collecting Rs. 365 per person. This amount is not going to burn a hole in tax payer’s pocket. There is still a very good chance of a person ending up paying less than what he would normally donate in a year. The amount is much less than the price we pay for a buffet or for a sumptuous meal.

This is Prasad’s most ambitious project till date! He has known people who quit studies because there was no one in their family to support them financially. Sometimes they had to take up small jobs at a young age to financially support their family. In the bargain they lost the opportunity to earn a degree and secure a good future.

Prasad confesses that it is Mahatma Gandhi’s quote “Be the change that you wish to see in the world” that inspired him to take up this noble cause.

Thought behind the Trust

After Mumbai was attacked by Terrorists in November 2008, the below letter of mine appeared in Pune Mirror: 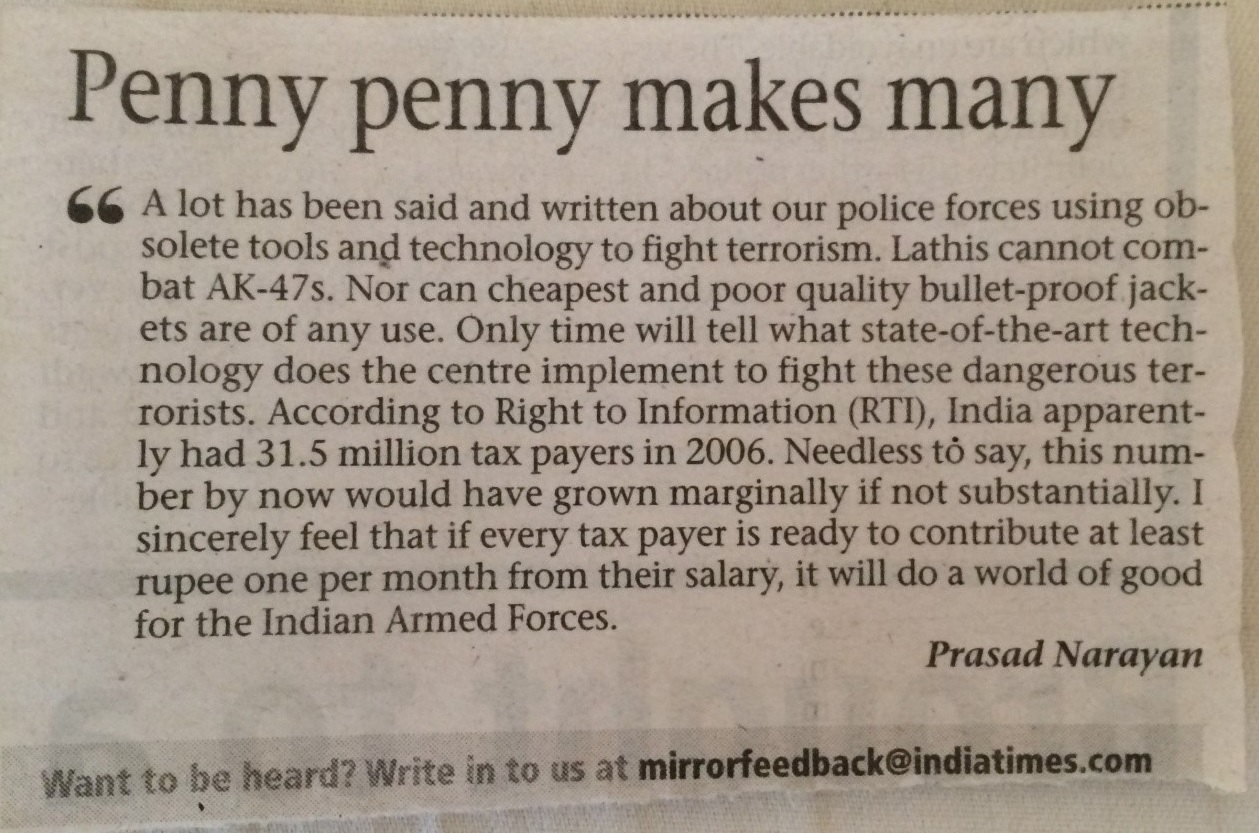 Later on, I suggested this idea to a few people but nothing materialised. But this idea lingered on in my mind. A couple of years ago, I was moved by the struggle of one poor family to educate their daughter who had a fantastic academic record. Though I helped this one girl financially, I realized that a single person can only do so much.

As per http://wealth18.com/number-of-income-tax-payers-in-india/ in a population of 1.2 billion people, there are just about 35 million taxpayers. If every tax payer in India can donate Rs. 1/day, we can collect Rs. 35 million/day. If 1/10th of people are ready to contribute Rs. 1/day, there will be a collection of Rs. 35 lakhs/day. If the number is further trimmed down to just 3500 contributors/day, there will still be a healthy collection of Rs. 1 lakh in a month. This amount will still be adequate for imparting education to a few.

One rupee hardly has any value today. If a shopkeeper does not have one rupee change, we don’t argue. But one rupee can change many lives for good or for the better if it is donated day after day, week after week, month after month and year after year for a noble cause.

Many NGOs expect you to contribute a certain amount. The minimum amount is often requested to meet a particular need. I myself have refused to donate at certain times because I couldn’t pay the expected amount at one go. I feel that’s where the problem lies. Charity should be left to the discretion of an individual. I DO NOT want people to think that this is another run-of-the-mill organization asking for money. I visualize ‘The Power of One’ as a systematic approach to charity, just like SIP investments.

It’s not about ideas. It’s about making ideas happen. As Steve Jobs famously said, “If you are working on something exciting that you really care about, you don’t have to be pushed. The vision pulls you”

Many of us may have heard about Joseph Juran’s 80-20 rule. In economics, this would mean that 80% of a country's wealth is controlled by 20% of the population. In Organizations, it is said that 20% of employees are responsible for 80% of a company’s output. 20% of customers are responsible for 80% of the revenues. A general rule of thumb states that 80% of outcomes can be attributed to 20% of the causes. In business, the 80-20 rule is used to help managers identify problems and determine which factors should receive maximum attention which potentially may be 20%.

Again, these are not facts or rules that everyone need to agree upon. Whether it is 80/20 or 60/40, it is safe to say that there is definitely a smaller percentage responsible of creating a big impact. When it comes to charity, the rule may well be the same. Fewer people are perhaps donating and those who are contributing may well be contributing a bigger chunk of the money.

‘The Power of One’ aims to change this perception. It doesn’t ask people to donate large amounts, but just a buck every day. It aims to involve the common man and make him a contributor to a social cause. It further requests donors to reach out to as many people as possible within their group, be it family, friends, acquaintances or colleagues at work. Your contribution will be used purely to educate a person who may well be someone known to you, somebody who needs financial assistance.

"United States’ President Harry Truman had the famous inscription on his desk."

Likewise, education is our collective responsibility and we should NOT pass the buck to other NGO’s, organizations and other high-networth individuals to educate someone. 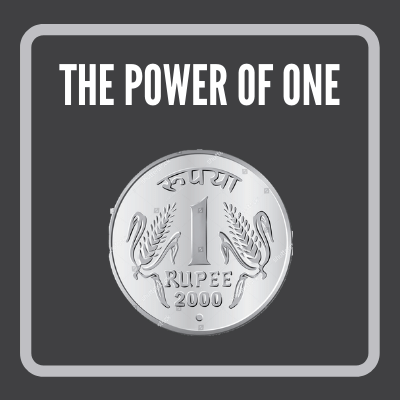